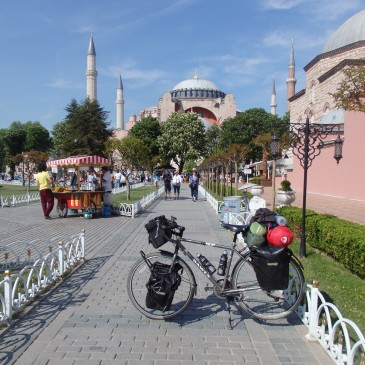 If the border change from Bulgaria to Greece was dramatic, the crossing into Turkey was something else. Finally I was out of the easy EU borders. This crossing had a long no-man’s land, rusty barbed-wire fencing and large ‘no camera’ signs against military personnel stencils. There were soldiers around the buildings and for the first time my bags were (very halfheartedly) searched.

Last night’s storm had clearly done damage – trees had fallen across the road and a big operation was taking place to clean the roads of branches. Even a long cobbled road couldn’t spoil my mood for once – I was in Turkey! From one end of Europe to the other…. I was feeling both proud of myself and also extremely excited for this new country.

We made a stop in the town Edirne for a night. It was a buzzing city – people everywhere. The faces were different here, the food was different, the religion different, the landscape too. The prices different too – we stopped for a celebratory beer and I’d forgotten how much tax the government put on booze here. I think I’ll be treating myself to food rather than beer in this country…

There was a festival happening in town, so we went to check it out with our Couchsurfing host. It was a strange affair – I’d never been to an event that size where you can’t buy a drink! There was a Turkish pop artist playing to a large crowd for a while, but when he stopped he was replaced by a iPod DJ that stopped and started, pounding EDM tracks mid-song to an audience that seemed to love every minute of it. The next band that came on were a metal outfit. It was a strange line-up…

The scenery wasn’t how I imagined Turkey to look. In fact, the rolling fields could have been England had they been a little smaller. We joined the main road to Luleburgaz. What I’d normally have judged a cycleable ‘main road’ in other countries clearly doesn’t apply in Turkey. It was huge, busy and uninspiring. (Little did I know these were to become recurring adjectives pedaling Turkey’s roads). From Luleburgaz we diverted from the main road and headed north to Vize. Pia wanted to reach the Black Sea before Istanbul and I had no plans that I cared about changing. I was more than happy to reach the sea – there was something exciting about the prospect of reaching water at the other side of Europe to where I started.

Slowly the roads became more peaceful  and we were treated to some peace and quiet. We cut through small villages which seemed to be from another world. Elaborate mosques amongst run-down buildings, dirt roads and oriental tea houses. The woman have disappeared too – in the villages it’s just old men loitering around the streets and hanging around the tea houses. It’s bizarre. But even when you think there’s no civilisation for miles, a distant call to prayer still echoes over the hills with the wind.

We looked for a place to camp in Kirikoy, but it was so windy we headed back into town. Outside a tea house we met a Turkish guy who’d grown up in Germany. Once again I was happy to have a German speaker with me – it seems everyone in Turkey has a friend/relative in Germany! He seemed like a really nice guy and invited us to stay in his home.

We had a really enjoyable night with him exploring the area, but the next morning ended up being one of the weirdest experiences of my life. At 7am I woke because Pia had jumped up next to me. Our host was standing at the end of the sofa bed we were sleeping on. They exchanged a few words in German and he walked out. Pia looked completely unsettled. I assumed he’d just woken us up, but her expression wasn’t a good one. Turns out she’d woken from him lifting the duvet over us and creeping his hand up her leg to where it definitely shouldn’t have been going… The fuck!? We got up and decided to make a swift exit. The was clearly something wrong with him – who does that? And so we awkwardly packed our bags as quickly as possibly and ran out.

We went to the beach to collect our thoughts. I found the experience uncomfortable and I wasn’t the one being touched up in my sleep. We decided to get out of the village and head inland to the next town.

We found a cheap hotel in Saray and had a much nicer time there. It was fun walking around town aimlessly, exploring the bazaar and drinking cay. The elections are happening in 3 weeks in Turkey. The campaigns are in full swing – there are billboards and placards on every street corner. Vans with the party leaders’ faces painted on drive around every street in the country (literally) with speakers on the roofs blaring out music. It seems a lot more colourful than the leadership race in the UK!

After Saray I said goodbye to Pia. She was meeting a friend and Istanbul was calling me. It was strange to be cycling solo again after a month of company but it was also nice to not have to be so democratic with every decision! I quickly realised how nice it was to have had some company. For many practical reasons, cycling as a pair has its advantages. One is having a bike guard: when you want to stop for a wee, nip into the shop or look in the woods for a campsite, you don’t have to lock all your stuff up every time. It’s easier to cook food, cheaper to share paid accommodation and less stressful to wild camp. But, most importantly, it’s nice just to have someone to share the moments with.

I found someone to Couchsurf with in a village near Cerzekoy. My host was a doctor from Istanbul, there as part of his compulsory post-uni job placement. The village/town was new and purpose built – big blocks of flats made for migrant factory workers, most of whom were Kurdish. On my way out, some doctors and nurses invited me for cay. I’ve been given so much stuff in this country already and I left with two new gifts – a lighter and a necklace. Not quite sure what I’ll do with the latter. It was funny to see them all sitting in this basement chain smoking cigs before their shift started. I doubt English healthcare workers would be coughing their way through their morning fag like that!

I rejoined the main road for a long and unexciting day south. Eventually I hit the Sea of Marmara and continued west towards Istanbul. I don’t think I’ve been so excited about a destination since I started this trip – I had goosebumps thinking about Istanbul. When I started cycling, Copenhagen was my ‘real minimum’ target. If I didn’t make it there I’d have been pretty disappointed. But Istanbul was my real target – it seemed so far away at the time and yet that would be a distance I would be proud of. I always knew I wanted to continue beyond Turkey, but Istanbul was all I’d been aiming for. Anywhere east from here is a bonus.

I stopped in the West suburb Beylikduzu, where my hosts lived on the 12th floor of an apartment block. I’m wasn’t really sure if it counted as Istanbul yet – it was certainly part of the city but still miles from the centre. The area was completely new – 50 years ago and this would still have been farmland outside of town. Look at it now…

I continued into Istanbul. The roads were crazy, I’d never felt so unsafe on my bike. Even in the city the drivers are still going 90 miles and hour and don’t seem to give a shit about me and my bike.

I headed for Sultanahmet – I figured then I’d really feel like I’d finished my trip across Europe and I could get a few cool snaps to prove it. Parking my bike outside the huge mosques was incredible – I really couldn’t believe I’d made it after months of thinking about this moment.

I felt like quite a celeb – a few groups asked me where I’d come from and I gladly told them. Normally I try and avoid talking about my trip unless asked but today I was happy to gloat!

I cycled to my host’s place further north. I’d struggled to find someone to stay with (for the first time in a big city), but fortunately my host from a couple of nights prior had a mate who’d said I could stay a few days.

My body needed a break – I hadn’t had a day off in two weeks. I deserved some time off being a simple tourist, and I did just that.

I loved Istanbul – it’s a crazy place but an extremely fun one. On my first day I visited Taksim Square and the busy walking streets around.

When my host took me to Kadikoy I finally realised the scale of the city. It took us ages to get across to the Asian side by tram, bus, metro and boat!

I visited the wonderful Blue Mosque, Hagia Sophia and did some browsing in the Grand Bazaar.

Istanbul’s description as ‘East meets West’ couldn’t be more true – on one corner the elegant youth sit in Starbucks drinking frappes in designer sunglasses, while round the corner the old men sip their sugary tea whilst playing board games in a scuzzy cay shop.

I met Pia again for a couple of nights before she flew back to Germany and I continued pedaling. It had finally dawned on me how much visa planning I had to do for the forthcoming countries so, (better late than never) I went to the Uzbekistan embassy.

The situation is fiddly. My planned route after Armenia is Iran, Turkmenistan and Uzbekistan. To get my Turkmenistan transit visa I need my Iranian and Uzbek visa in advance. My Iranian ‘Letter of Invitation’ is being processed so I needed to start the Uzbek paperwork. If you are Danish, you need a LOI to apply for the visa, but not if you are British. So, I went with my UK passport and then (once they’d done half the paperwork) told them I actually needed it in the Danish one so that I could get my Turkmen transit. (If that makes any sense). He looked a little confused, disappeared and then returned to tell me that I could collect my visa in Ankara in 10 days. Success!

It was nice to have some company in Istanbul. I’d been threatening to shave my head before I left, and Pia said she’d pay for it if I got a lightning bolt sketched into the side of my head. I agreed, thinking it would be funny, and now I have a really stupid haircut that I massively regre. Ah well, it’s not like anyone will recognise me here…

In the morning I packed my bags, cycled down to the Bosphorus, hoped on the boat and began my trip into Asia. Cycling solo, once again.